Key West is the southernmost town in continental US and is only 90 km away from Cuba. Naturally, there has been a lot of Cuban influence here and some early entrepreneurs had successfully run cigar rolling factories in the town. To me however, the most important aspect of Key West was that it was the home of Ernest Hemingway for about 10 years from 1931. Hemingway arrived at Key West when he was 28, along with this second wife, Pauline. He stayed here till 1940 and then he just jumped across the ocean and moved to Cuba and he also married his third wife Martha Gellhorn, at that time. Caribbean lifestyle is etched into Hemingway’s works. Hemingway himself was a great angler and his love for fishing was well catered to, during his life at Key West. He also bought the boat “Pilar’ which remained a love of his life, at this time.

A comfortable drive in the morning took me to Key West and the day was looking sunny even though there were a couple of clouds in the horizon. I had been told that the sunset, as watched from the western end of the town, called Mallory Square was a grand spectacle and was looking forward to that. The first port of call was, of course, the Hemingway House. It is a two storey house set in a one acre, lush green compound. The house itself is built in the Spanish Colonial style and was built in 1851 – Pauline’s Uncle Gus gifted it to the couple in 1931. 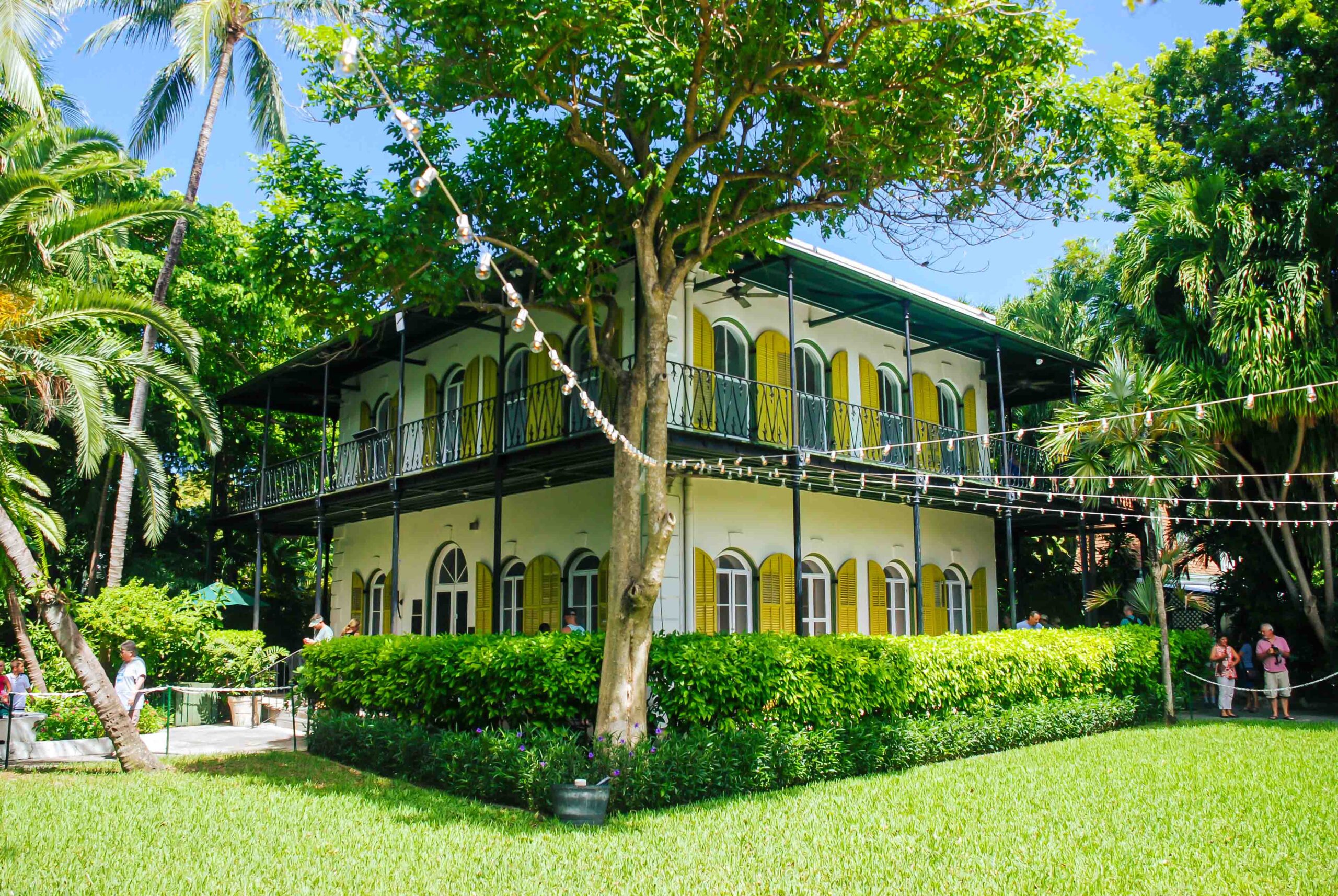 There was a free guided tour going on when I arrived. The guide seemed to be very passionate about the house and she was full of energy and enthusiasm in explaining various aspects about the house. She mentioned that almost seventy percent of all of Hemingway’s works were written in this house and I suspect that was a case of her getting carried away by her enthusiasm. What I read in the internet was that he had done the final editing of “A Farewell to Arms” while he stayed at Key West and also worked on novels like “Death in the Afternoon”, “The Snows of Kilimanjaro” etc. The only novel he wrote fully in the 1930s was “To Have and Have Not” and it is a novel based on Key West and its people. 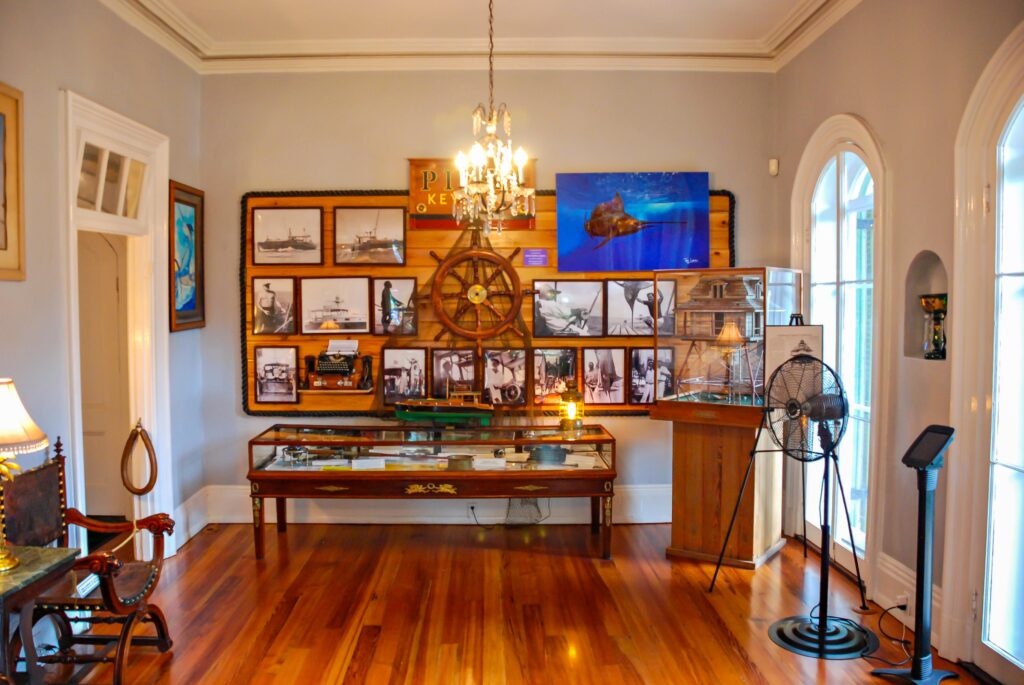 The rooms upstairs had photographs reminiscent of Hemingway’s time in Paris and trips to Africa. The guide explained that his first safari was once again sponsored by Uncle Gus at a tremendous cost of US Dollars Twenty Five Thousand, which must have been a huge amount of money in those days 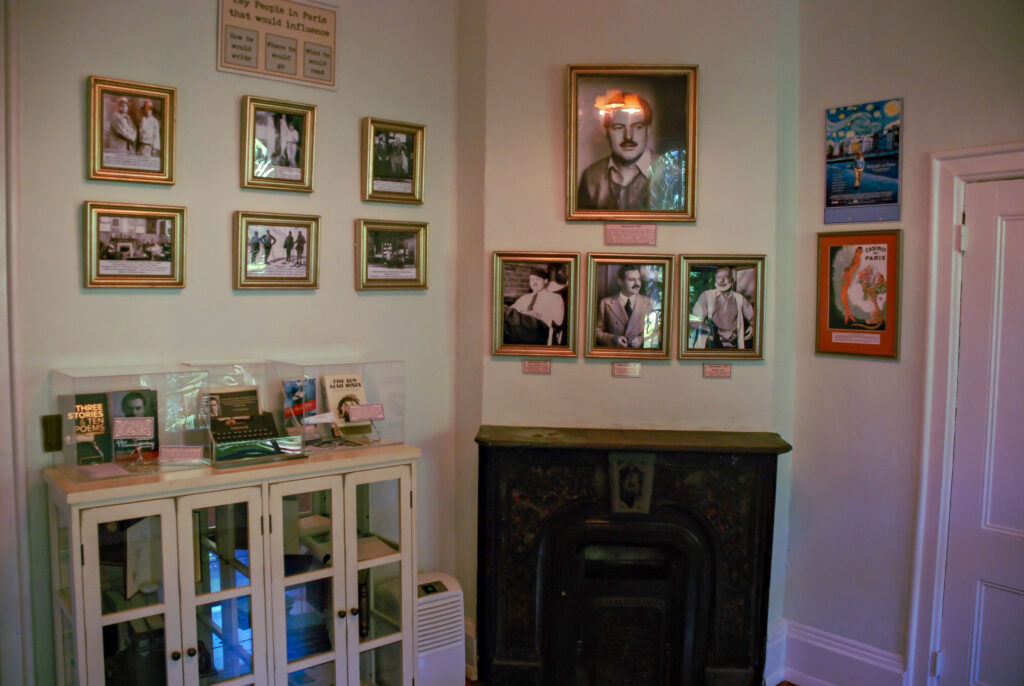 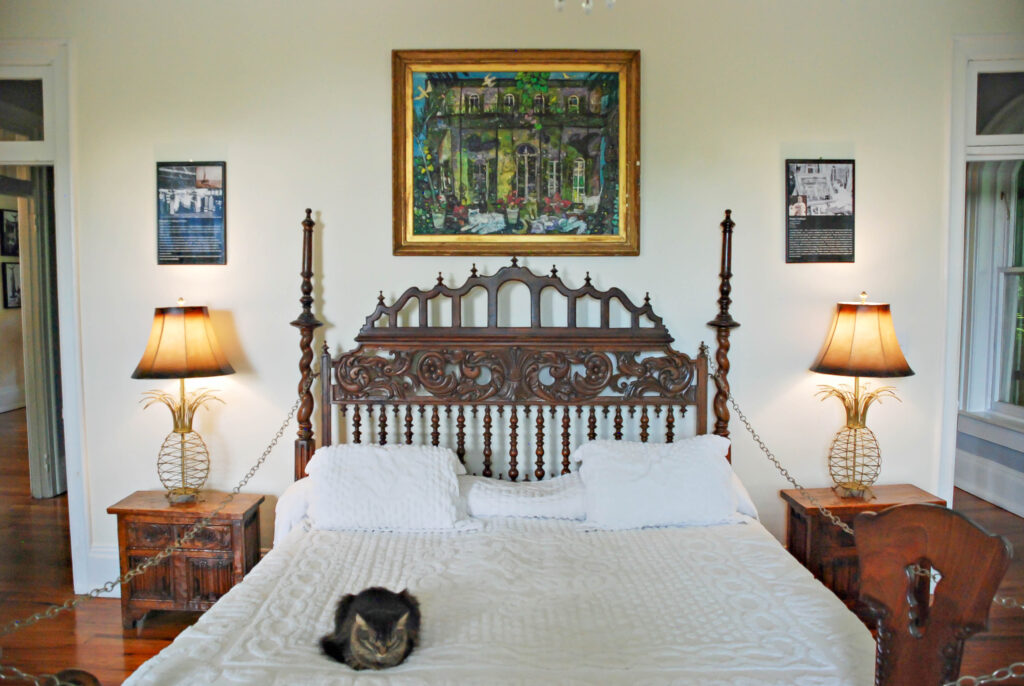 In one of the rooms there is a photograph of a lady named Agnes von Kurowski who was a nurse with American Red Cross and was serving in Milan during World War I. Hemingway was an ambulance driver with the Red Cross and after he suffered some serious wounds, he was admitted into the same hospital where Agnes was a nurse. They soon fell in love and planned to get married. However, later on she changed her mind and married someone else. Supposedly, she inspired the character Catherine Barkley in “A Farewell to Arms”. 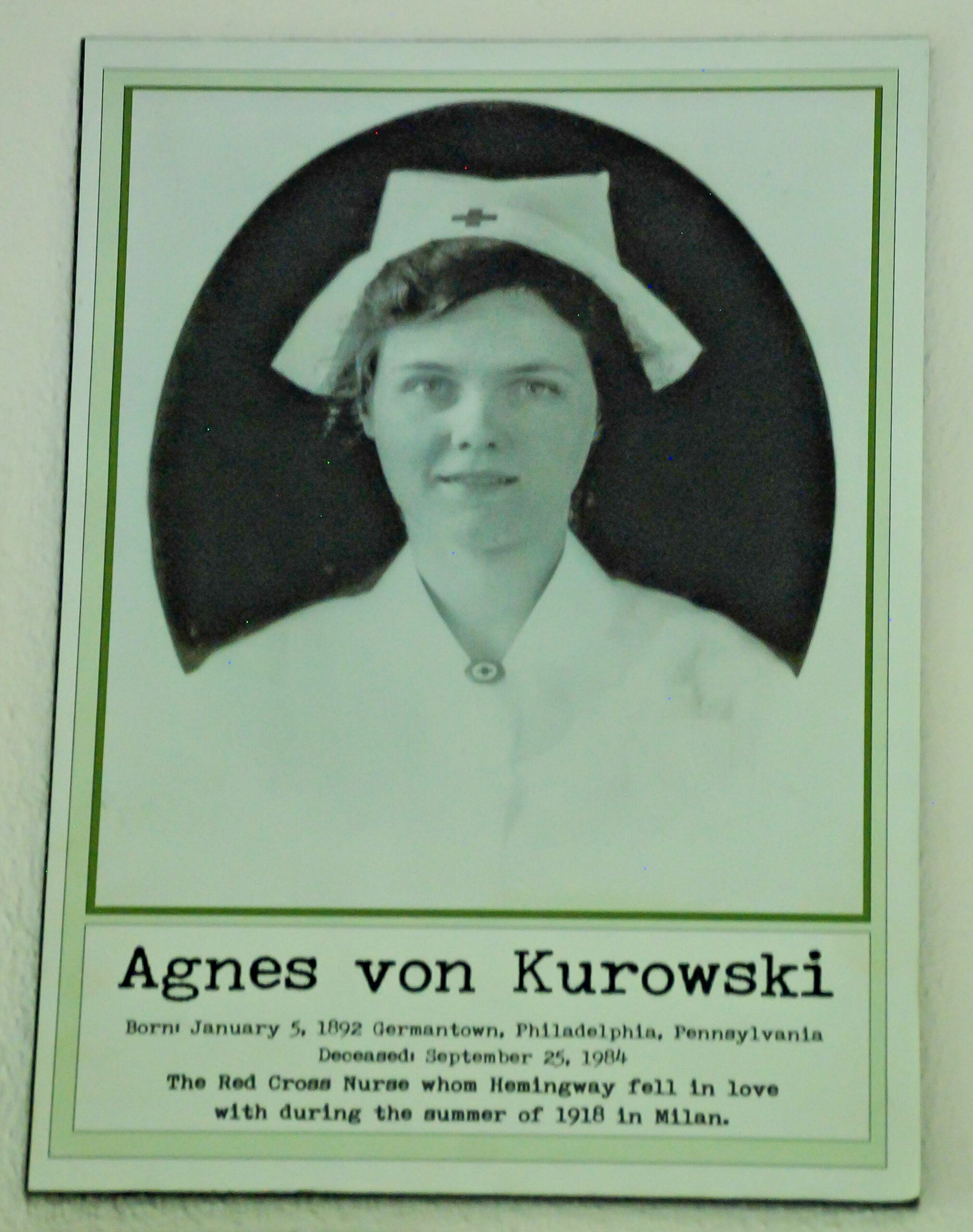 Hemingway had a writing room or office set-up above the coach house and had also built a walkway from the verandah to the writing room. It seems he followed a rigourous work schedule of writing each day from six in the morning till twelve in the afternoon. Rest of the day was spent in socialising and recreation. These days, the walkway has been removed and the writing room is accessed through a separate staircase. 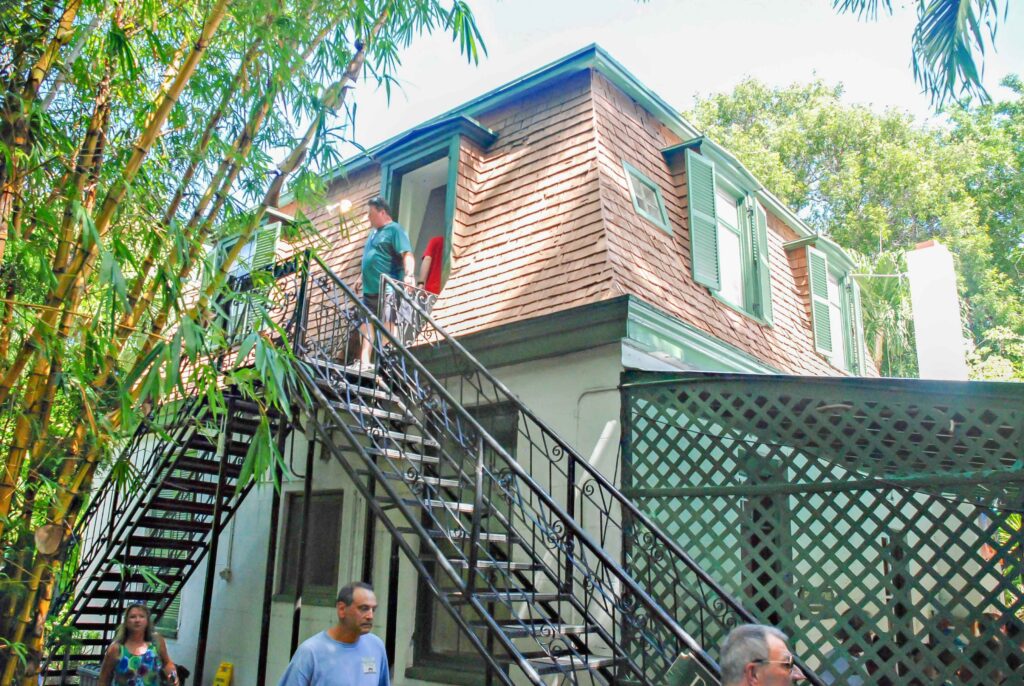 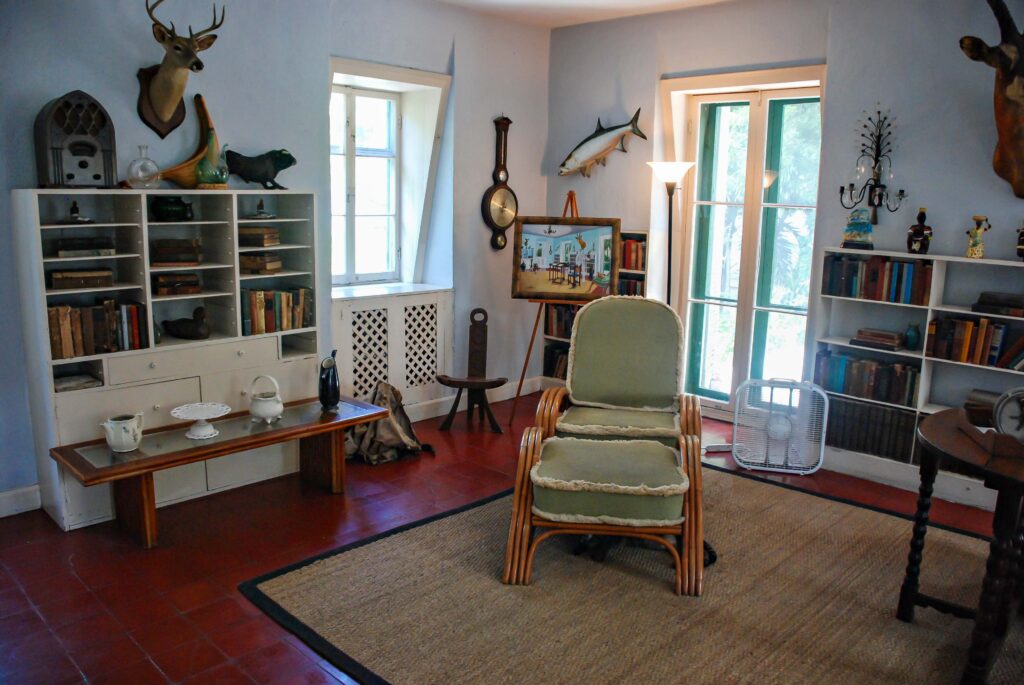 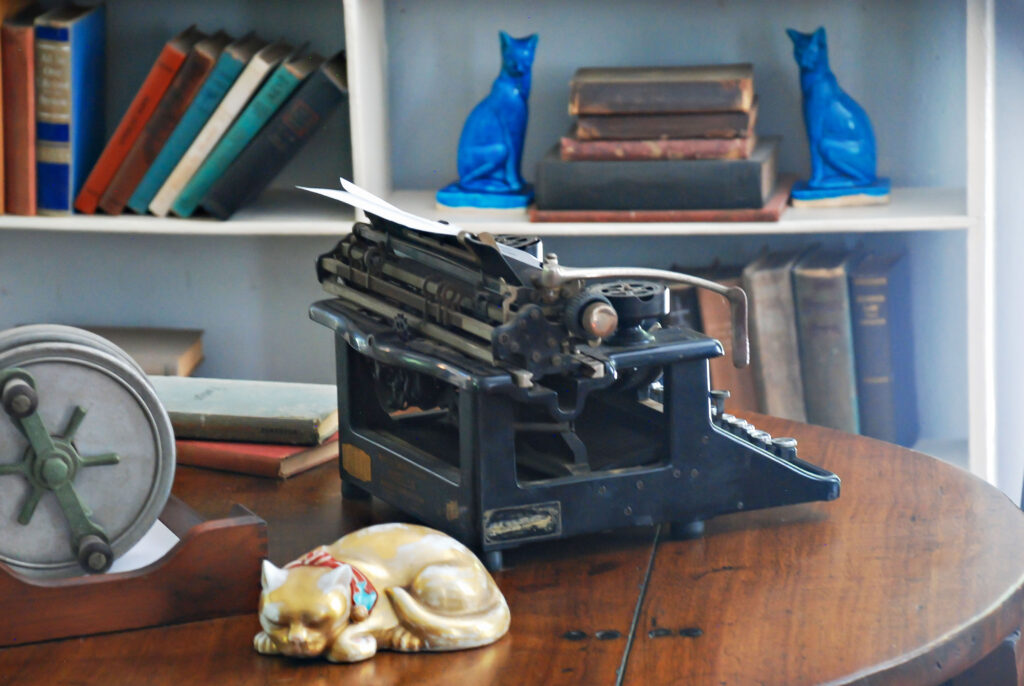 The grounds of the house are lush green and very tastefully laid out. There is also a large swimming pool, which was supposedly the first pool in the area and constructed at a huge cost. Hemingway was apparently very superstitious and believed that six toed cats brought him luck (seems this was a common belief among sailors of the time). He kept up a large population of cats around the house and you can see them even today. 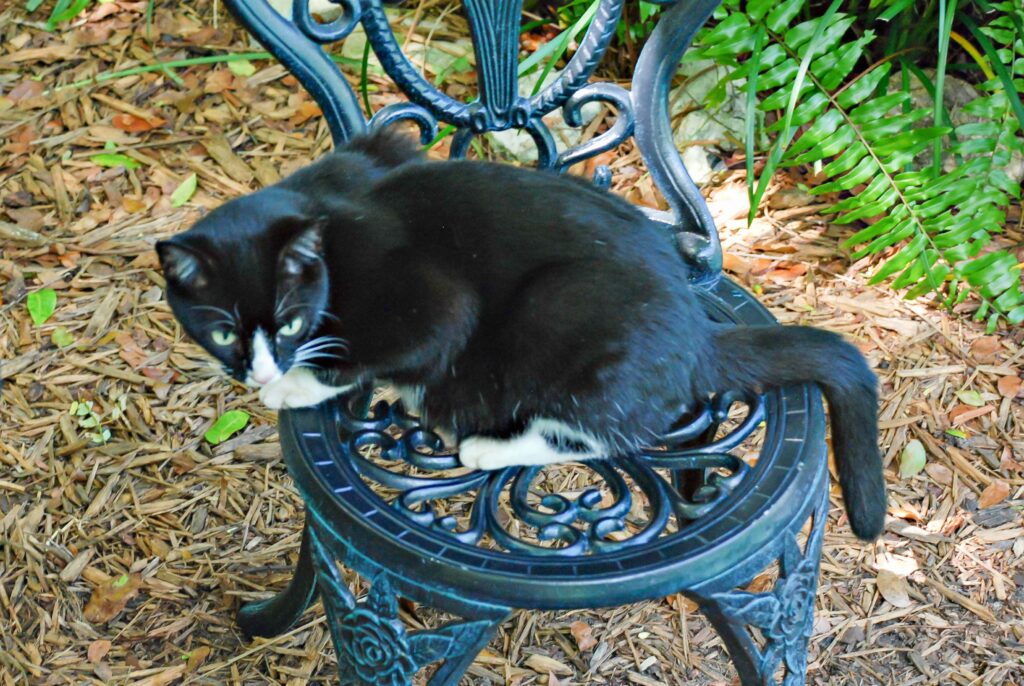 While I had read many of his novels, I had not come across To Have and Have Not. I found a copy of the book in the gift shop and thought it befitting that I should buy that novel from Key West itself. I spent quite some time roaming around the house and noticed that it seemed to attract a good number of visitors.

By this time, I was getting tired of all the walking and decided to pay a visit to another establishment that was connected with Hemingway – a bar named Sloppy Joe’s. It belonged to a person named Joe Russell, who was Hemingway’s friend. Hemingway spent quite a lot of time in this bar and it seems his third wife, Martha Gellhorn, met him here for the first time. Sloppy Joe’s has changed hands since but they keep the history alive with Hemingway look-alike contests that are conducted each year. There are many photographs of Hemingway inside the bar and it seems like a popular place with lot of people coming in. I spent about an hour there thinking about Hemingway and his life and books; of course, a nice Martini helped me along in the process. 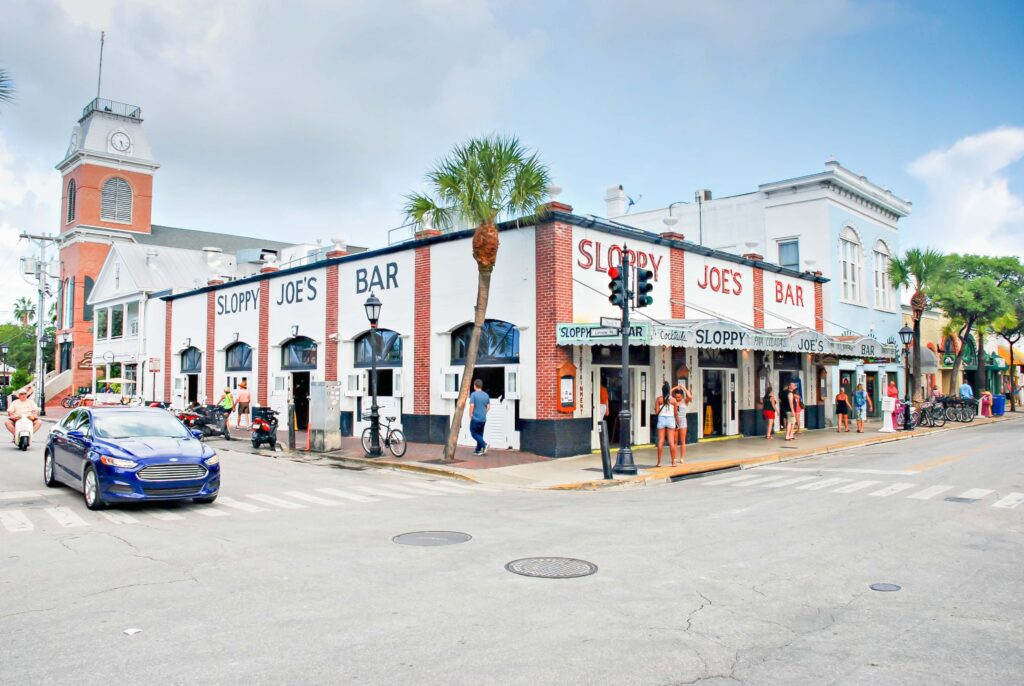 As I drove back to Marathon, I reflected on the day. I felt the visit to Key West and Hemingway’s house had connected me more with his work. In the past, I had been to the Caribbean a few times and had seen the island lifestyle but somehow, I had not connected well with Hemingway’s writing about fishing – possibly because it does not appeal to me as a sport. Yet, I think I understand him a bit more now. As I sat down to dinner, I opened To Have and Have Not and started on the first page.