“Why do you make everything about feminism?”, people ask me. The truth is, I ask myself that a lot more than you can imagine. It’s exhausting how much I have to ignore on purpose to look ‘just-sane-enough’ to the outside world. For example, here’s a train of thought of mine from the last day, which wouldn’t have come out in public if I didn’t have to write an article for this magazine.

The Society for the Promotion of Indian Classical Music And Culture Amongst Youth (SPIC MACAY) organized a Rajasthani folk concert at my institute last evening. Two magical hours. The lead singer, a man in his 40s, introduced his 10 year old son who went on to sing a Sufi song. The kid stole all our hearts within seconds. His father explained how these songs have been passed down through generations, how none of these lyrics are ever written down in a book, how his son sits behind him during practice sessions and stage shows, and learns the songs from his father– just like he did, from his father and him from his father. That’s when I noticed what was right in front of me for over an hour– an all men troupe. Where are the daughters? Do they also get to sit behind their fathers and learn their craft? If they don’t, why? If they do, why are they not sharing the stage with their fathers and brothers? Ironic how at least half of the songs were about sad women waiting for their lovers or husbands to come home. Later at home, after some research, I discovered that the lead singer’s father was a national award winning artist who toured the world with his four sons for concerts. 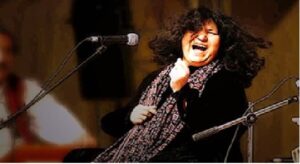 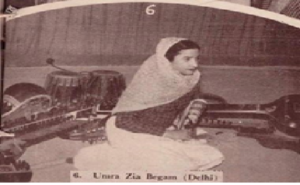 I had goosebumps when they sang Mast Qalandar and Chaap Tilak. Every artist who has ever given Sufi music a shot has their own version of these songs. My favorite would be Abida Parveen’s versions. There! We have a woman who made it! How did she become one of the highest paid singers of Pakistan who was bestowed with Nishan-e-Imtiaz and Hilal-e-Imtiaz, Pakistan’s highest civilian awards? I turned to Google looking for answers. Turns out, Ustaad Gulam Haider, her father, was a Pakistani music composer. “Parveen’s talent compelled her father to choose her as his musical heir over his two sons”- Wikipedia’s words, not mine. I dug deeper. What about Parveen’s mother? “Gulam Haider who composed music for the then famous singer, Umra-o-Zia Begum, later married her” says Wikipedia. The “then famous singer” doesn’t have a Wikipedia page. The “then famous singer” is not mentioned anywhere as related to Abida Parveen. I dug through every website there is to confirm if Umra-o-Zia Begum is in fact Parveen’s mother or not. All of them have “unknown” against “mother’s name”. Why, how, and when does our mother’s name disappear from our bio-data?

To make matters worse, I found a video of the song Peene Ke Din Aaye Piye Ja sung by Umra-o-Zia Begum with “singer wife of Ghulam Haider” written in brackets. “After marrying Ghulam Haider, Umra-o-Zia Begum said farewell to the show business. She was never seen again even in a public gathering” says another website which also calls her “a singing-star who earned the title of Bulbul Hazaar Dastaan from the music buffs”.

The next evening was a Qawwali night. A troupe of 7 men with obviously Muslim names, clad in stereotypical Muslim clothes started the concert singing praises to Ganesha, Parvati, and Shiva. They kept telling us how much they love the country, how they’re Hindustanis first and everything else comes second to that identity. They modified a few lines of the famous Qawwali Allah-hoo to say how Hindustan is protected by the knowledge of the Gita. It was sad having to witness the results of what this country has done to its Muslims over the course of past few years, making them feel pressured to prove their nationalism with every breath they take. But let’s leave that discuss to the next edition of the magazine, maybe.

This is four hours of an average day in my life. It’s an everyday struggle ignoring millions of such thoughts about millions of women who lose opportunities, identities, and even their lives in this world which is designed for men. It breaks my heart to think of all the little girls who’ll come after me and will have to choose these same fights for so many more generations to come. If you think my feminism is too loud, believe me when I say this is as toned down as it can get. Because if I live my life without toning it down and shutting it out, I wouldn’t be able to sleep at night.